September 29, 2015
to read the original and fully illustrated version of this blog entry, click here: 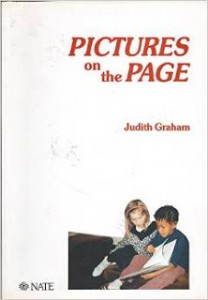 This blog was born out of two events: a Mocksted visit to my previous school and a rereading of Judith Graham’sPictures on the Page for my very first seminar at Oxford Brookes’ School of Education. What I share here are my own thoughts but I cannot deny that they have been steered by Graham’s. Published back in ’91 her words still ring true and her text should be considered as the first stepping stone into understanding the power of picturebooks. I’d like to share the Mocksted incident first as it might ring true for many teachers who have had to tackle with those who don’t ‘get’ picturebooks and may not be applicable to those who read this blog but have nothing to do with state education. If that’s you, then please feel free to start at Accessibility.

A straw upon the camel’s back.

We had decided, as an Academy, to have a Mocksted. Our Head had moved on and we wanted to see where the gaps were before we received the soon-to-happen phone call.  As part of the SMT, I’d already taken part in several Mocksteds and found them useful: asking experts who inspect on a regular basis to offer guidance makes a lot of sense.
The Inspectors were polite and offered clear advice but one comment was made that got my back up. I was sat at the conference table in the Head’s office with the Inspectors, Executive Head, Acting Head and Heads from other schools in the partnership and our own SMT when the Lead Inspector said:
“Reading throughout the school was generally good but poor in Year 6 where some pupils were reading books that were too short.”
Being the English Coordinator, and Assistant Head, I asked what he meant.
“I saw a boy in Year 6 reading a picturebook. He should be reading something thicker.”
The rest of my SMT could see me getting angry (I never get angry) and one of them had begun to firmly kick me under the table to stop me speaking but I felt duty-bound to correct him. His comment became a reason for me leaving the school and moving into Higher Education. It is my hope that I can stop other training teachers thinking the same way he did.

I explained that the child was probably reading Anthony Browne’sVoices in the Park since it was part of our Anthony Browne Week (our precursor to World Book Day involving each yeargroup from Nursery to Year 6) in which critical thinking and talk around the texts had been a central to the planning. By the way, Mary Roche’s Developing Children’s Critical Thinkingthrough Picturebooks is a wonderful text for anyone who wants to adopt a critical thinking approach to the teaching of reading through picturebooks.
The Inspector did not back down and said that the child would not become a better reader through reading picture books. I asked him if he had picked up the book and read it or if he had read anything by Anthony Browne or even Shaun Tan because no matter how ‘thin’ the book was, the ideas they explored were greater than many novels. The Executive Head subtly steered the discussion on and I was left seething.

I have spent my entire teaching career championing the importance of picture-books in education: from Pre-School all the way up to Year 6 and beyond. I have worked hard at dissolving the myth that picturebooks are only for younger children. It’s an understandable mistake to make; they don’t have many words and the pictures can appear simplistic. Here’s an example (click here ).

Taken from Browne’s The Tunnel, it shows an illustration of a young girl fleeing through a wood. A quick glance shows her caught in mid-run wearing a red coat and, fearfully, casting her gaze behind back – possibly to check that she is not being followed. There are no words. Not because it’s a book for early readers who are yet to handle decoding but because the picture is doing all the talking. The picture could be read as simply as that, it’s what almost every reader will be able to pick up from the scene but there are greater things afoot: things that novels cannot do but picturebooks can.
We learn early on in the book The Tunnel that Rose (the young girl) has a fascination for fairy tales. When she goes through the tunnel to save her older brother, Jack, she finds herself in a world in which many fairy tale tropes related to danger are projected. Even the least-skilled observer could spot the cottage in the background which might contain a witch but would they notice that the curtains are pulled aside leaving the shape of a witch’s hat in its space? Yes, Browne did this on purpose; it’s a nod to his version of Hansel and Gretel. 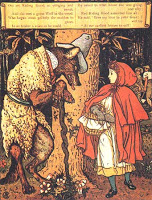 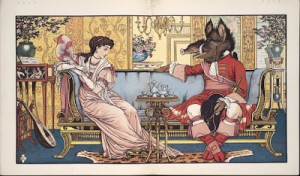 There are other things hidden in the woods including a reference to Dali but I think the point I wanted to make has been made. What might appear simple and easy is, with the best picturebooks, very complex: the pictures are often doing far more than we might give them credit for. There are things going on within them that affect our reading and interpretation of the text in a way far deeper than the superficial level that many perceive picturebooks to be working at. These images of wolves, witch’s houses, boars and bears are Rose’s fears come to life. She is running through the forest of her mind. Whatever you think, it cannot be denied that the picture now asks for a deeper response that goes beyond what a novel could without losing its senses.
Pictures can bring greater comprehension to what is written and can often illustrate far more of what is going on than words can. Here they allow us an insight into Rose’s thoughts and feelings in a more immediate and metaphorical manner to the text: they become a powerfully accessible introduction to symbolism.The same can be said of  images from Browne’s Voices in the Park. We don’t need to read a single word to know that the youngster in the image is looking back with a sense of longing. Yet there is a conflict of interest as the broad and firm arm of the adult with him steers him onwards. Her red hat is a dominant colour in the scene and a repeating image to be found at the top of the gate-columns as well as her neck-scarf and shadow. Is he off to a happy place? Perhaps, but look at the path ahead and you’ll see troubled waters (literally). 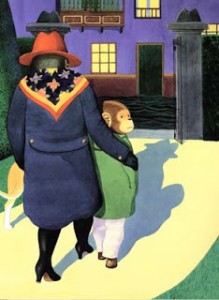 Like the previous image, the picture is saying a lot more than we first may have given it credit for. You missed the watery pathway, right? It’s okay, so did I and I’ve read this book dozens of times. That’s what’s wonderful about picturebooks: they encourage us to return over and over again in the hope that we find new meaning with each reading.
Are picture books written for children with weaker imaginations? No, of course not. Are they only for younger children? I hope I’ve convinced you differently. Yes, books with pictures can open minds and experiences to children with limited imagination. Pictures can also help readers tackle unfamiliar words by supporting them to use clues from the picture to identify unfamiliar words. Pictures are also easier symbols to read than letters and words – we start reading them years before we do the latter. They are simpler to decode because it is easier for us to see what they represent. But this is not their only function.
I’m often asked by students and parents to elaborate on what I mean when I say ‘it’s not a quality picturebook’ or even ‘it’s not a picturebook’. In answer, I always call on Maurice Sendak who said: ‘I wanted at all costs to avoid the serious pitfall of illustrating with pictures what the author has already illustrated with words’. A great picturebook is one in which the words and the pictures work together to tell the story but they never say the same thing. Here is an example from Pat Hutchins’ Rosie’s Walk. I use this because it was the very first picturebook shared with me as a student and it illustrated brilliantly how, when reading a picturebook, you don’t just enter one world, but two.

The text tells us that Rosie the hen is going for a walk, but the picture? Well, that tells a different story doesn’t it.

I have spent years battling teachers and parents who see reading schemes as the premier reading tool in school. Although I have seen real progress in early readers who read using fully decodable texts, I also see how little attention those readers pay to the accompanying image. That’s because they know that the story is told just as well through the words: there is no symbiotic, fruitful relationship. A deep and meaningful reader-response experience which is so abundant in quality picture books is absent from any scheme and that’s fine. That’s not their function. The reward of reading these schemes comes from mastering the art of decoding print off the page.
Great picturebooks ask the reader to think, question, delve into worlds and ideas that may often be beyond the realms of their experience and imagination. They encourage the reader to think and build meaning, to play and imagine, to reflect and enrich. They are the first steps into exploring our place in the world whilst discovering the lives of others. Why wait until you’re a fluent reader devouring novels to get to that point when picturebooks offer you a way in much, much earlier?

Popular posts from this blog 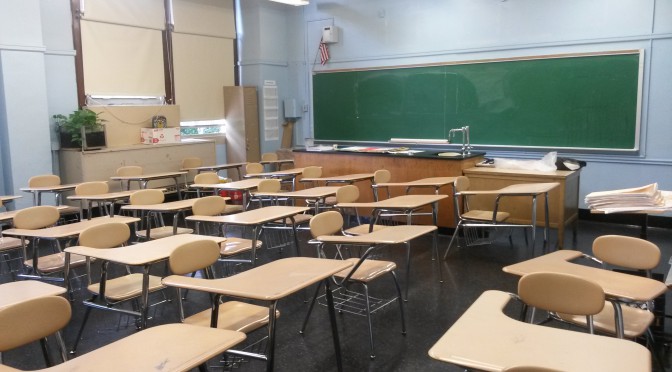 By Patrick Alexander (Originally published here)
Like most social scientists, my approach to methodology is in important ways entangled with personal narrative. My interest in age as a field of social analysis emerged from my early experiences as a secondary school teacher. As a twenty-three year-old trainee, I was barely older than the more senior teenage students in my charge. At the same time, I was easily recognizable to my senior colleagues as member of the same generation as their own children. Training to be a teacher involved my immersion in the uncertain performance of several different identities: professional adult, grown-up in a classroom full of kids, youthful teacher. It was jarring to me to experience simultaneously what seemed like mutually exclusive categories of age. Out on the playground, students (and, sometimes, teachers) engaged in their own complex and ever-shifting negotiation of the age-based rules of engagement in everything from friendship to bullying, dating…
Read more

June 30, 2014
Friday’s TES published a letter from a group of educationalists to Michael Gove calling for the abolishment of the Year 1 ‘phonics check’. Signatories included the general secretary of the UK Literacy Association, the chairman of the National Association for Primary Education, the general secretary of NASUWT, and the chair of the National Association for the Teaching of English. In response to the letter, one well-known educational commentator (@oldandrewuk) tweeted “See some phonics denialists got a letter in the TES”. I’m not going to spend any time questioning the use of the markedly pejorative term ‘denialists’, and the attribution of a questionable ethical agenda that is usually implied by it. I’ve done my homework here and see that Andrew Old has used this term in relation to phonics for some time, been called out for it, and made his responses. But the substance of the charge (implied in this tweet but offered explicitly elsewhere) is that a large number of academics and other e…
Read more